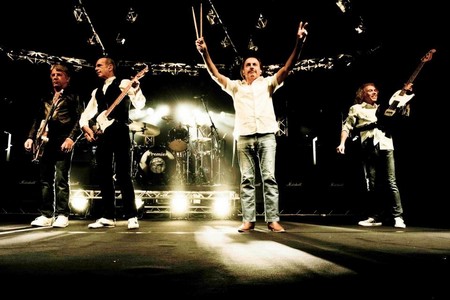 Status Quo have a lot of history in Glasgow where they played the world famous Apollo nearly 30 times during the bands heyday in the 1970s and 80s, and even recorded the multi-platinum selling double album ‘Live!’ there in 1976. So it’s only fitting that the band have a two night stopover in the city as part of the current ‘Frantic Four’ reunion tour, and it’s clear from the reception that Glasgow loves Quo as much as Quo love Glasgow.

As the support band, The Treatment, leave the stage and as the bars fill up, the chat around me predictably turns to the legendary Apollo – a venue that’s never far from a Quo fans mind. This would be the first time that both drummer John Coghlan and bass player Alan Lancaster have played a Status Quo gig in Glasgow since the old Apollo days and the nervous excitement bubbles through the arena – goodness knows how the band are feeling backstage. As Eric Clapton’s ‘Cocaine’ finishes (an in-joke by the band perhaps?) the lights dim and the whole venue erupts with one voice.

From somewhere above us comes the disembodied voice of Jackie Lynton and his famous intro to the ‘Live!’ album, which is nearly drowned out by this audience of seasoned Quo veterans and younger fans that will not have seen the classic line up live. The band quietly saunter on stage to a truly roof raising reception. 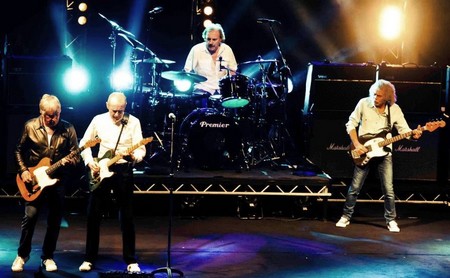 There has been much debate about these gigs in recent months – what would they say when they walk onstage, what song would they start with? The answer to the first question is nothing at all, but the second questions is answered when the familiar intro to ‘Junior’s Wailing’ kicks in. For the next ninety minutes, Status Quo rocked The Academy just as they would have done back in the day at the Apollo.

There has been a lot said about Lancaster’s frailty in recent months, but all respect to him, his bass skills and his vocals are spot on tonight as he takes charge of the Quo-train. ‘Backwater’ and ‘Just Take Me’ have the crowd almost delirious as Lancaster continues to take centre stage while lead guitarist Francis Rossi wanders around the stage relishing the novelty of not being the lead vocalist for a change.

Three songs in and Rossi finally has a chance to speak to the wild crowd saying simply “John Coghlan and Alan Lancaster everybody!” to thunderous applause whilst the two men take a well earned bow. ‘Is There A Better Way’ (only debuted in the bands set list in 2009) and ‘Rain’ both have the head bangers going down at the front. The band are so tight that even Coghlan’s momentary lapse of concentration means he loses a stick but doesn’t miss a beat.

Status Quo are notorious for not rehearsing but the band have obviously put in a lot of extra effort to make sure these reunion shows go without a hitch and the hard work has paid off handsomely. Classic tune after classic tune is delivered with polished professionalism. One of the highlights for many of the fans is to hear ‘Blue Eyed Lady’ (from 1972’s ‘Hello’ album) played live at last – amazingly this song has never been performed live until this tour, despite requests from many, many fans over the years.

Rhythm guitarist Rick Parfitt is usually at the forefront of Quo gigs but tonight he’s taking a step back and stands almost hidden at the back beside a wall of Marshall and Vox AC30 amps. It takes a while to realise that he’s too busy concentrating on what he’s doing to look up to the crowd! He does however have his moments in the spotlight with ‘4500 Times’ and ‘Little Lady’ and the classic ‘Big Fat Mama’, the latter of which delivered with such might you remember that Quo in the Seventies were a hard rock band, and a hard hitting one too.

With the lack of a keyboard player on this tour, the familiar strains of ‘Rocking All Over The World’ are absent but no-one seemed to really mind, as the set list is so well put together, it avoided a lot of big singles with the band preferring to concentrate on classic album tracks instead. With a final blast the band literally tear through ‘Down Down’ (surprisingly the bands only number one UK single); storm through a great version of ‘Don’t Waste My Time’ (going from zero to one hundred miles an hour in seconds) before a tiring Lancaster takes the vocals one last time as they bid farewell with ‘Bye Bye Johnny’.

These reunion gigs seem to have re-fired the enthusiasm of the band for Rossi and Parfitt. It’s a fitting way for Lancaster and Coghlan to finally get a proper chance to thank the bands loyal fans for all their support over the years since they’ve left the band, and say a final goodbye to them too. Status Quo are back (albeit temporarily) with one helluva Rock n Roll show – if you get the chance to see it, this is one gig that you really shouldn’t miss.

This review is respectfully dedicated to my friend Cameron who was a huge Status Quo fan, and I’m sure would have loved to have seen these ‘Frantic Four’ gigs.