It’s rare I review re-releases but occasionally a rare jewel re-emerges and ‘Evocation Of Light’, originally released as a limited edition CD and cassette in 2013 by Swiss melodic Black/Death Metal outfit Stortregn is one such album, this time coming out as a gatefold album on marble coloured vinyl via Non Serviam Records on 20th September 2019, so if you missed it last time around or are a vinyl fiend now is your chance to grab a copy.

What originally drew me to this release was its subtle nod to both Thulcandra’s 2010 ‘Fallen Angel’s Dominion’ and Dissection’s 1995 masterpiece, ‘Storm Of The Light’s Bane’, two all-time favourite albums of mine, having enough reminiscent elements to draw me in, including blue artwork, but being a sufficiently original and inventive beast of its own making it worth my attention also and whilst their equally good 2018 release, ‘Emptiness Fills The Void’, took on a more contemporary, technical edged sound it still had that latent quality, but let’s get back to ‘Evocation Of Light’. 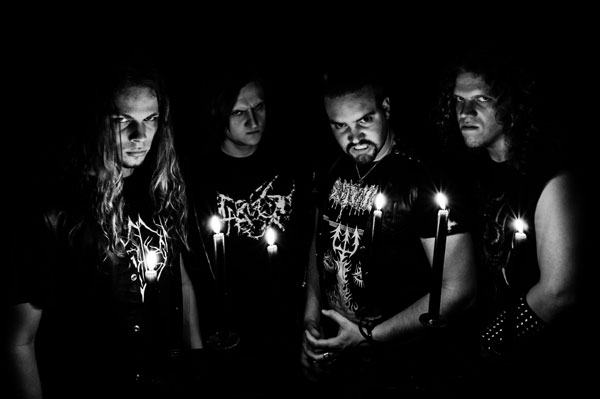 ‘Evocation Of Light’ is a nine track, forty minute, baroque influenced slab of melodic blackened Death Metal and another step in the evolution of the sound of Stortregn which perfectly melds beauty with brutality. They achieve this with carefully considered contrasts, up-tempo intense blackened riffing, rasping vitriolic vocals, plus a soaring opening roar on ‘So Much Dust’ and unrelenting drum rhythms balanced with often haunting, melodic punctuation, emotive lead work and baroque acoustic guitar work.

If you love one track you’ll love them all as they all posses those same qualities and elements, making the album an aural journey, ebbing and flowing fluidly and organically, taking a reflective interlude in the second half with the baroque acoustic instrumental, ‘A Mournful Saraband’, but generally it’s an up-tempo offering from the opening ‘Inner Black Flame’ with its mood setting sublime acoustic opener to the final track, the seven-and-a-half minute monster, ‘The Call’.

Tracklist:
1. Inner Black Flame
2. Epitaph – An Evocation Of Light
3. Between Shadow And Soul
4. Negative Theology
5. Moonshade
6. A Mournful Saraband
7. So Much Dust
8. Thoroughfares
9. The Call

I’m a huge fan of what Stortregn have achieved in recent years, their two most recent full lengths, 2016s ‘Singularity’ and 2018s ‘Emptiness Fills The Void’, but there is still a big place in my heart for this classic release.