‘Scream For Me Sarajevo’, the movie about the unlikeliest music concert ever, when Bruce Dickinson took his band into the war-torn Bosnian capital in 1994, was screened in London last night with a special Q&A session with Bruce also taking place.

The film itself was described by Andy Rawll in our review last October as “an extraordinary story of human spirit and the triumph through music over adversity” and Bruce himself said in his recent best-selling autobiography, ‘What Does This Button Do?’, that the song ‘Inertia’ from his 1996 ‘Skunkworks’ album was written about the Bosnia experience. Note the similarity between Bruce’s current hairstyle in the photos from last night and how it looked in the original video.

Bruce said it was the first time he had seen this particular cut of the film and that it was “quite emotional in places for me” and “extraordinarily well done”, backed up by the fact that it has already won awards at Film Festivals around the world before it’s general release, including three awards at the Sarajevo Film Festival last year (Human Rights Award, Audience Award and Best Documentary Award). 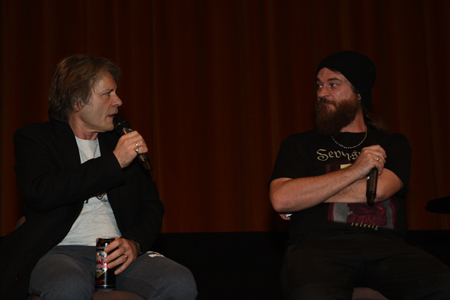 Producer Adnan Ćuhara was unable to attend due to family reasons but was mentioned early on by Bruce, who relayed the story almost word-for-word as he told it in ‘What Does This Button Do?’.

One part not included in his autobiography was the story about the two New York fire engines being unable to be put into service because the chief of the Bosnian Fire Service had sold all the diesel supplies on the black market.

Bruce was particularly delighted that members of The Serious Road Trip, the non-Governmental organisation that operated relief convoys in the area and who provided passage for the band from Split to Sarajevo, were in attendance and when one member first made herself known, Bruce could barely contain himself:
“Are you from The Serious Road Trip? You deserve a medal, the lot of you. You are, without question, the maddest bunch of lunatics with the biggest hearts that I have ever encountered. The stuff that you did, which was not commercialised, it was not bigged up by other rock stars or sponsored by American Express, you just got on with it and just did it, you drove a big red London bus into the middle of the frontlines and held a clown school. Good on you!
“And you’re Kiwis too, which we like because you don’t tamper with the ball.” 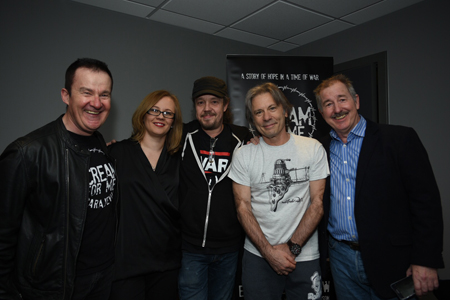 “A compelling, engaging and sobering film with a Metal heart and a Slavic soul.”Andy Rawll, October 2017.

“It changed the way I viewed life, death and other human beings.”Bruce Dickinson, 2017