Legendary Southern rockers Lynyrd Skynyrd are in the country to say farewell to their UK fanbase with four arena dates as part of their ongoing ‘Last Of The Survivors’ Farewell Tour. It’s a great way for Skynyrd to thank their British fans for nearly five decades of support and if that wasn’t enough, they’re being joined on the tour by another legendary band nearing the end of their career, those denim clad boogie rockers Status Quo.

Up and coming Lancaster based noise monsters Massive Wagons were also invited to join the party and we caught up with everyone at The Hydro in Glasgow on the first night of the tour.

An early start time meant that the cavernous Hydro arena was barely half full as the mighty Massive Wagons hit the stage, but those who did turn up got a powerful showcase performance from them. No matter if it’s a sweaty club or an arena show, one thing is constant – the bands incredible energy translates so easily from stage to audience.

Kicking off their first ever arena show with the ever popular ‘Tokyo’, the quintet produced a high octane thirty minute set that showcased the bands ever increasing back catalogue and the musicianship that has propelled them quickly up the ladder of success.

Vocalist Barry Mills is a dynamic frontman and he covered every inch of the stage trying to get the audience involved – something which wasn’t an entirely fruitless task judging by the noise the crowd were making at the end of ‘Ratio’ whilst ‘Hero’ was unashamedly dedicated to every one whose ever bought a Massive Wagons t-shirt, showing how much these northern boys value their ever increasing fanbase.

As usual, the fast paced ‘Back To The Stack’ was dedicated to Quo’s fallen guitarist Rick Parfitt and got one of the biggest reactions of the night while ‘Last On The List’ ended the set on a high with the audience on their feet and shouting for more.

Are the Wagons a band with the world at their feet? Absolutely! Will they be headlining arenas in their own right in a couple of years? Well no-one deserves success more than these guys.

Billy Balloon Head
Back To The Stack
Hero

Status Quo are on the verge of releasing album number thirty three, ‘Backbone’, which is due to hit CD and record stores in September (you can get full details at the bottom of this review), and it’s a landmark album from the band because it’ll be the first studio release not to feature fallen guitarist Rick Parfitt, whose memory casts a long shadow over the band.

There were two new numbers from the album, ‘Cut Me Some Slack’ and ‘Liberty Lane’, slotted into the set here and although unfamiliar to most of the audience, the tracks certainly kept the burgeoning crowd entertained and they’re not at all bad, though they don’t stray too far from Quo’s signature sound.

The rest of the hour long set was made up of stone cold Quo classics like ‘Caroline’, ‘Roll Over Lay Down’, ‘Down Down’, ‘Whatever You Want’ and the ubiquitous ‘Rocking All Over The World’, all performed with gusto. The band could have done without the tiresome ‘The Oriental’ which seems to have been lingering in their set since 2003 but that’s a personal thing because plenty of the audience seemed to enjoy it.

Frontman Francis Rossi was aware of the time constraints and made polite but short banter with the audience whilst keeping the show moving forwards. Richie Malone, who took up the mantle of rhythm guitar in 2016, stepped up for lead vocals on the Parfitt penned ‘Mystery Song’ with bass player John ‘Rhino’ Edwards up front for ‘Rain’, whilst keyboard player Andrew Bown stepped up to the mic for ‘Whatever You Want’ which he wrote with Parfitt in 1979. Time didn’t allow Leon Cave his usual drum solo but the tub thumper put in a solid performance throughout the show.

Before you knew it, it was all over as the band took their farewell bows and left the stage to a warm reception, and all before the clock struck 9.00pm – an early finish by Quo’s usual standards.

With no Winter Tour announced yet for this year, it’s unclear whether Quo will grace any UK stages again in 2019 but with their new album coming soon, it’s more than likely they’ll be back headlining venues like The Hydro in 2020 and possibly beyond. 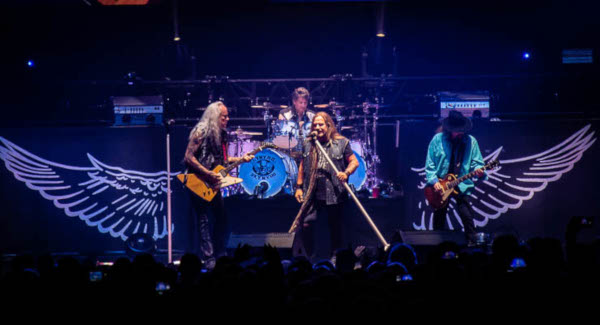 It’s just over twenty years since I first saw Lynyrd Skynyrd live, during one of their infrequent trips to the UK, so now seems as good a time as any for me to see them live for the very last time. This band introduced many to the world of Southern Rock, a genre which is still serviced well by Blackberry Smoke, Black Stone Cherry, The Kentucky Headhunters and many more.

The current Skynyrd line-up features only one original member, guitarist Gary Rossington, and the band have survived tragedy and numerous line-up changes over the years to cement their place in rock history and the Glasgow crowd were more than ready for them as they came on stage just after 9.00pm. 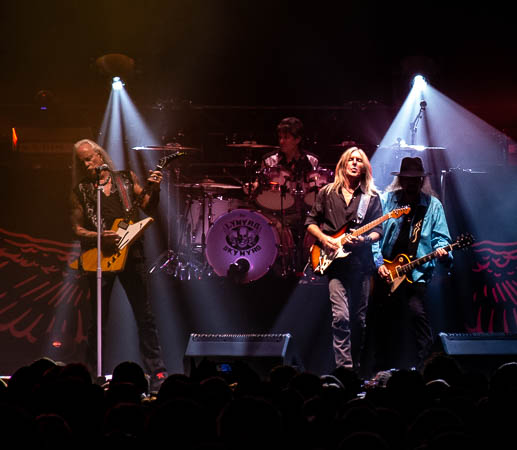 Honestly, there’s nothing like AC/DC’s ‘Thunderstruck’ to fire up an audience, and they were on their feet and punching the air before the house lights went down. For the next ninety minutes, a majority of mobile phones were placed in pockets and bags as the audience enjoyed a showcase performance from the reigning kings of Southern Rock.

The set was a well worn list of classic Skynyrd numbers kicking off with ‘Workin’ For MCA’ followed by ‘What’s Your Name’ and ‘That Smell’ which mixed effortlessly with newer material like ‘Skynyrd Nation’ from 2009s ‘Gods And Guns’ release. Johnny Van Zant kept the audience on their toes throughout the evening whilst Rossington, along with the ever reliable Rickey Medlocke and relative newcomer Mark Matejka kept the trademark three guitar sound on track.

The Ballad of Curtis Loew’ (dedicated to the diehard fans) and ‘Tuesday’s Gone’ (covered by Heavy Metal titans Metallica back in the late nineties) were warmly received midset additions whilst the foot stomping ‘Gimme Three Steps’ had the audience on their feet again before a triple whammy of classics – ‘Call Me The Breeze’, ‘Sweet Home Alabama’ and the inevitable closer, ‘Free Bird’ – for which Johnny Van Zant left the stage allowing archive footage of his big brother Ronnie to take centre stage, bringing a dignified curtain down on the first UK show of this final tour to rapturous applause. 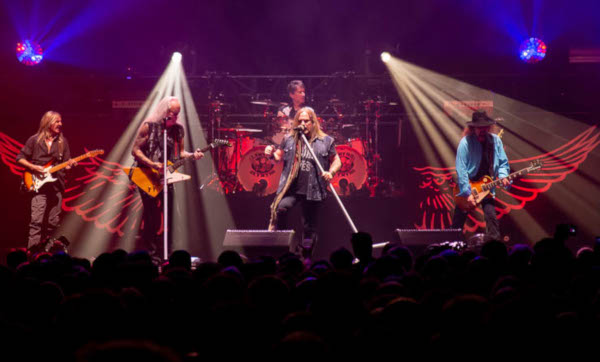 If you think Skynyrd are a creatively spent force, then think again because although this is the band’s last ever tour, they’re getting ready to enter the studio for one more album before they retire the name permanently.

For me, Skynyrd have always delivered the goods on stage and this performance was absolutely no different. In case you missed the news, Status Quo have announced the release of ‘Backbone’, their first new studio album since 2016s ‘Aquostic II: That’s A Fact!’ release. Available from Friday 6th September 2019 through earMusic/Edel, ‘Backbone’ will be the band’s 33rd studio album – meaning that the vinyl edition will be their 33rd 33rpm.

‘Backbone’ is an important release from the band because it’s the first studio album from them since the untimely death of Rick Parfitt in December 2016, something which frontman Francis Rossi is acutely aware, telling us: “Losing Rick was hard to bear but, through Richie Malone, who was inspired to pick up a guitar by him, we can not only keep going but actually pick up the pace.

“The energy that he (and drummer Leon Cave) bring to Quo can’t be underestimated. I wasn’t sure I had another album in me but I couldn’t be more proud of ‘Backbone’. I hope the fans love it, but you can’t please everyone and I’m not going to start trying to now.” Recorded at Francis’ home studio in late 2018 with some recordings conducted in early 2019, initially these sessions were just to keep the juices flowing, improvise and have fun, however, as time went on and the songs stacked up, everyone began to believe that something special was happening, despite some initial resistance, even from within the group themselves.

Francis added: “This new material had to be seriously good. Quo have achieved so much and meant so much to too many people for the quality to slip now. Also, let’s face it, things have changed and we’re an easier target than ever.”

‘Backbone’ features a trio songs drawn from the classic partnership of Francis Rossi/Bob Young as well as contributions from all of the rest of the band and they’re all looking forward to seeing what the fans think of these brand new compositions. In fact two tracks, ‘Cut Me Some Slack’ and ‘Liberty Lane’, have already made their debut in the Quo live set and they’ve received a mostly positive reaction from Quo’s army of fans.

‘Backbone’ standard CD tracklisting:
Waiting For A Woman
Cut Me Some Slack
Liberty Lane
I See You’re In Some Trouble
Backing Off
I Wanna Run Away With You
Backbone

TIPS TO WRITING A ROCK AND ROLL RESEARCH PAPER