The momentum behind US rockers Halestorm has been building for some time and has finally reached arena headlining stage in Europe, with them topping a three band bill in big halls for the first time.

halestorm,
Lzzy Hale and her bandmates are all for powerful women in rock getting the chance to shine, so Ash Costello of opening act New Year’s Day grabbed the opportunity with both hands. The Los Angeles quartet have an intriguing mix of sounds with flavours of nu-Metal, old school riffing with glossy pop-Metal overtones and all topped off with strong vocals from their enthusiastic frontlady. 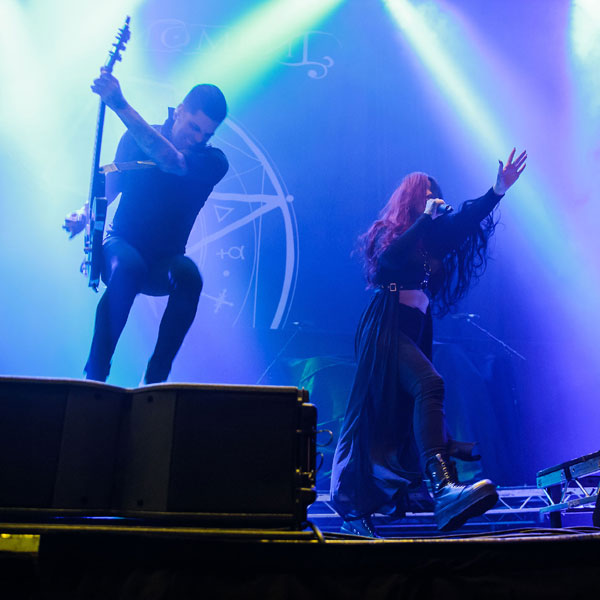 There’s plenty of charisma and no little talent there, and excited by playing in their biggest gig to date at the cavernous Hydro, Costello talks an awful lot between songs and spends a lot of time working the audience. Fortunately the headliners have given them the time to do it in, so it has the required effect and gets the crowd on their side. Their cover of Pantera’s ‘Fucking Hostile’ is surprisingly melodic but it’s the horns in the crowd pumping through set closer ‘Defame Me’ that shows they are able to grab an audience all on their own.

I’m all for a bit of theatrical rock so In This Moment with their Lady Gaga meets Marilyn Manson vibes should be right up my street. It doesn’t quite work out that way though, as in a set hampered by technical difficulties I just can’t find enough to grab on to. 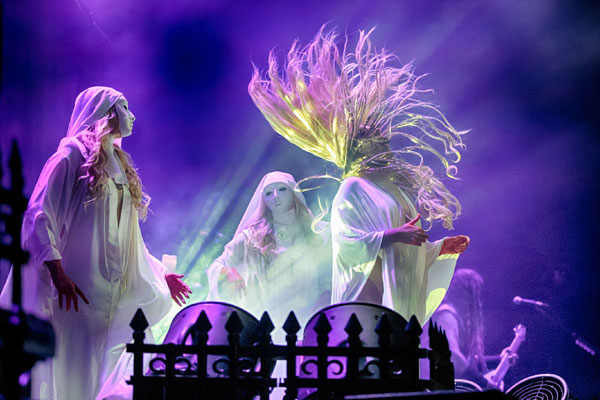 The stomping grandeur of ‘River Of Fire’ promises much but the dead stage space between songs and an unnecessary drum solo deaden any momentum and by the final set piece extravaganza of ‘Whore’. I’m feeling Maria Brink’s heart is in the right place but the live show is yet to match that vision. It should be pointed out though that they had a lot of fans here who will probably disagree with me intently.

One of the many attributes that has typified Halestorm’s rise up the rock rankings is that they have guts. Well known for switching the set around night to night to keep things interesting, they decided to start the show in their first headlining arena tour and in the biggest hall they’ve ever topped the bill at with an a capella intro. Lzzy Hale’s spine tingling vocals reach out into the darkness before she walks on stage, says “hi” and the band launches into the sensuous grooves of ‘Do Not Disturb’. 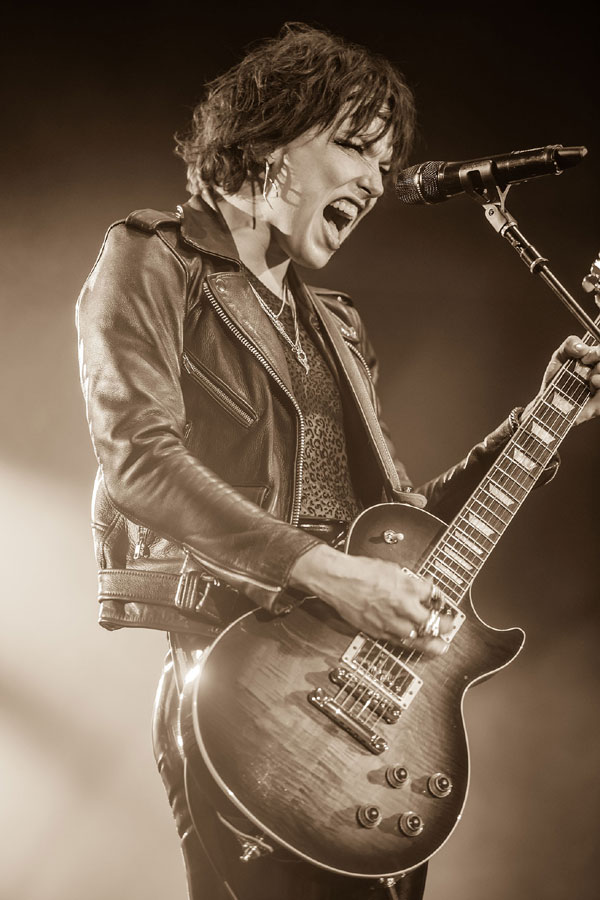 A brave start it may be but these guys know exactly what they’re doing. The line “I like your accent” is showcased of course to the Scottish crowd and from there they can do no wrong in their adoring fans’ eyes.

The lightshow has been pumped up to match the setting, but underneath the blitz of colours this is still just a good old fashioned rock’n’roll band. Battle hardened by years on the road they’re a unit that is somehow tight and controlled, relaxed and excited all at the same time. 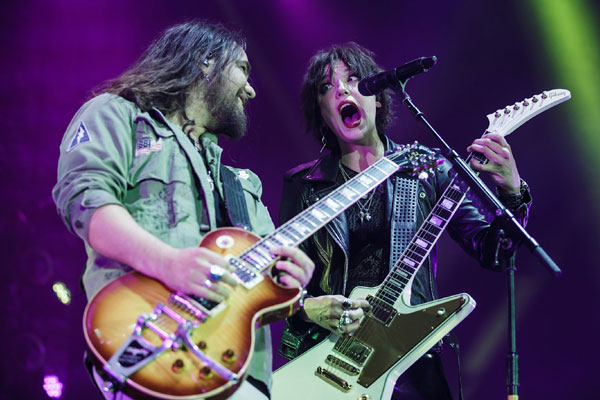 Bass player Josh Smith is the quiet man of the band, the rock it all sits on but even he is animated and enjoying the big stage. His partner in rhythm Arejay Hale is a more focused drummer these days, keeping his licks lasered in on what the song needs while still looking and acting like the flamboyant rocker that he is.

Guitarist Joe Storm loves taking centre stage when he can to throw out those searing licks and dazzling runs and when he combines with Lzzy on extended dual guitar workouts the enthusiasm is infectious, it’s so seventies yet so modern all at the same time. 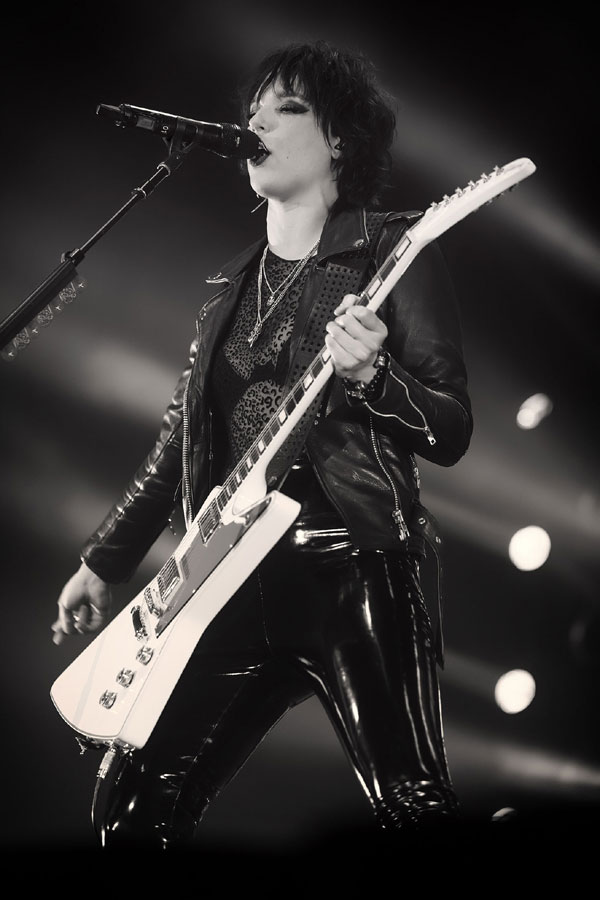 Upfront Ms Hale is all ‘Mz Hyde’, prowling the stage in Kiss size high heels and looking and sounding every inch the rock star she is. Vocally she has the chops to do anything she wants, all that primal rock screaming balanced out by the ability to add powerful melody anywhere or to take things right down to piano and vocal basics and still dominate the room.

The Halestorm back catalogue is a veritable goldmine too so the songs are there to back up all that musical talent from a stripped back ‘Familiar Taste Of Poison’ and incendiary ‘I Am The Fire’ to newer high energy rocker ‘Uncomfortable’. 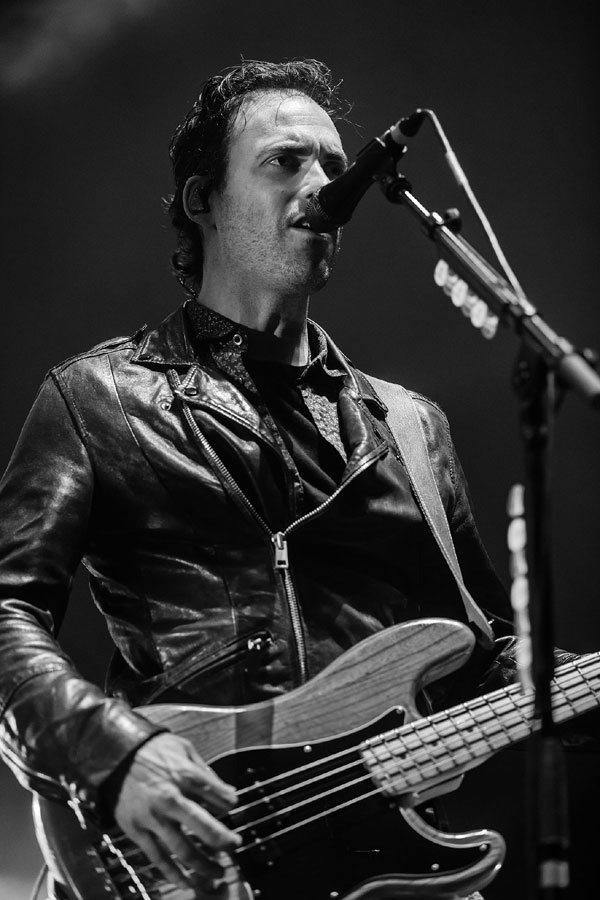 There is the inevitable drum solo with some added bass this time around which isn’t anyone’s favourite type of rock’n’roll entertainment and some people were a little confused by a superbly sung snippet of Dolly Parton’s ‘I Will Always Love You’ being thrown into the mix but this is Halestorm in terrific form and they can pull off just about anything.

The show ends in magnificent style with a ten minute plus version of ‘I Miss The Misery’ complete with crowd sing along, ‘Freebird’ style guitar workouts and false endings, a real throw back to some of the great arena rock acts of the past. It just confirmed to me that there are a new generation of bands who have taken on the mantle of making these massive halls reverberate to the sound of rock’n’roll and Halestorm having now joined them may well end up as the best of them all. 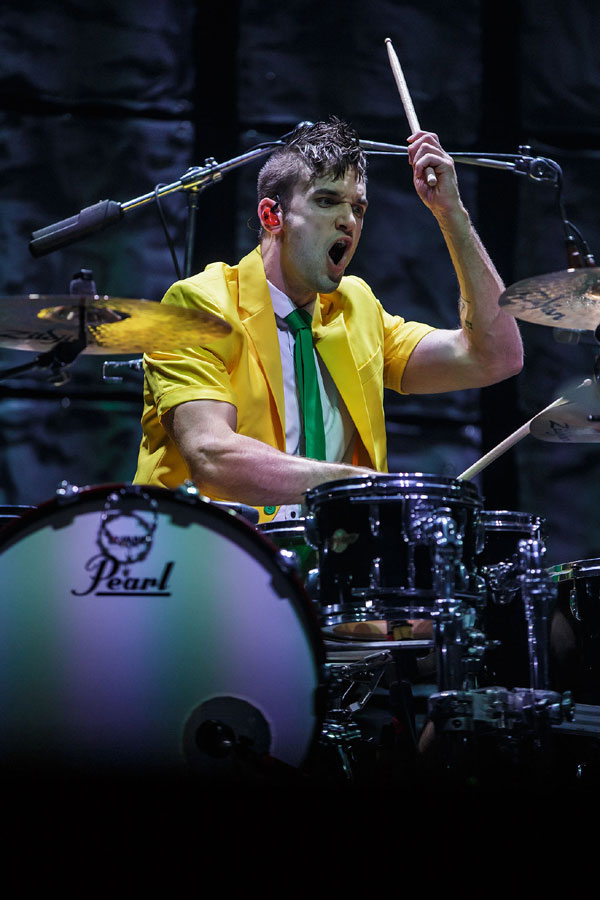 FROM THE ABYSS: CATTLE DECAPITATION MAP OUT THE TRUE HORRORS WITH 'DEATH ATLAS'