After a successful US tour and innovative album launch via streaming platform Twitch, DragonForce are mid-way through their UK tour, entertaining their loyal fanbase with material from new album ‘Extreme Power Metal’ and choice cuts from their surprisingly long career.

MetalTalk caught up with singer Marc Hudson just before their London show at the O2 Kentish Town Forum.

MT: Good evening Marc, how’s the tour going? Have there been any memorable moments so far?

MH: Hi, yes, we’re having an enormous amount of fun this tour. The crowd reaction has been fantastic and it’s going really well. We played Hull for the first time and were blown away by the reaction from the crowd! We’re also looking forward to tonight because it’s the first show on the UK tour where we have the full production, including the huge dragon, which won’t fit into the smaller venues, plus the two giant arcade game cabinets.

MT: So there’s been a very positive fan response to the new album then?

MH: Definitely! This album has been a great success so far, we’ve had loads of positive reviews and we’re playing up to six songs from this album in the show, which fans seem to like!

MT: That’s great to hear. And I believe you’ve also achieved something unique in Heavy Metal – a circle pit to Celine Dion?

MH: Yes, that’s right – definitely an achievement for the band. We’ve had a few circle pits to this song on the US tour too!

MT: For those that aren’t aware, on the new album you cover Celine Dion’s ‘My Heart Will Go On’. Can I ask what made you choose this song?

MH: We wanted to do something unique. We’re always asked to cover songs people will know, like ‘Painkiller’ by Judas Priest. But it would still sound like ‘Painkiller’, so we wanted to put our own stamp on a totally unique song, something that would surprise or even shock! It’s also a really catchy song and everybody knows it, so it’s been a brilliant way to include newer fans who may not know many of our earlier songs. It really brings the crowd together. 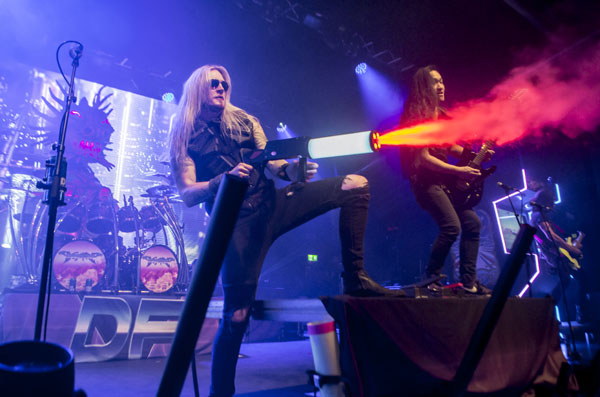 MT: You are an established Power Metal band, but this new album is remarkably melodic and radio-friendly. Why have you gone down this route?

MH: We actually had no restrictions on this album. We decided to just relax and go with exactly what we felt like doing and not worry about being overly serious. Our music is fun and we basically embraced our true nature and said “Let’s do whatever we want”. It came together very organically and it’s working out well.

MT: Let’s talk about Twitch, the streaming platform for gamers. How did this come about? Can you tell us non-gamers a bit about this?

MH: It really started with Herman Li. He started his channel on Twitch and it has been a great platform to show fans new things, particularly behind the scenes access to Herman recording his parts for the album. Herman was able to bring people really close to the process and give a new level of insight.

Twitch is a media channel which other musicians may not really have tapped into yet, and so it’s been an opportunity for us to show the songwriting and recording process, tracking the guitars, backstage footage and live shows. It started off as a bit of fun, but now it’s quite serious and we performed at the opening ceremony of TwitchCon back in September. We streamed the show live, with over 50,000 people watching the whole set and over one million people combined who dipped in and out across the span of the whole set.

MT: You seem to have found a unique niche and a new young fanbase in the gamer community. Is that the case?

MH: Yes, in the video game Metal world there’s always been a few instrumental bands, but we have really taken the lead with our retro-futuristic 80s video game themed album cover and stage set. We’ve always been influenced by video game music, but have taken it up a notch. I can’t believe how it’s all fallen into place. We sort of said let’s have fun, build a cool stage set and have a dragon and next thing you know, here we are!

MT: So what’s next for the band?

MH: Well we are doing a music video for every single song on the album. We’re not really releasing singles; we’re just releasing every single song with a video, which we think will keep the interest high through next year. We have about five or six videos ready to go via YouTube. We’re also probably going back to the US again for another tour in 2020 and we generally tend to tour the whole world so I’m sure there’ll be lots more to come! Not to mention next year we’ll be supporting Iron Maiden in Manila in May 2020, which will be incredible.