What better way to kick start your year than with two European metal heavyweights.

If the Metal gods had done their job properly, Accept would not be playing second fiddle on any bill anywhwere. Having announced their arrival in 1983 with their iconic ‘Balls To The Wall’ album, the German powerhouse Metallers never reached the dizzy heights that were as good as nailed on but let’s be positive and just be thankful that these guys are still bangin’ it out with brute force. 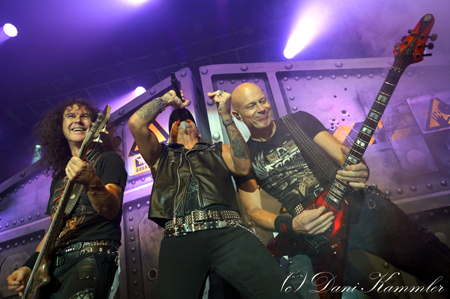 And that’s exactly how they made their entrance. Tearing into a rampaging ‘Stampede’, they immediately gave the Dublin crowd a size fifteen jackboot in the shins. That was swiftly followed by ‘Stalingrad’ which has grown in stature in the live arena over the past couple of years, and tonight it gave off a clear indication that they were rightly up for it.

Mark Tornillo strutted about like he was having the time of his life, at times reminding me of Brian Johnson. No joke, smack a Newsboy cap on his head and you’ve got him. Accept stalwart Wolf Hoffmann is still the imposing presence he always was, looking like a Uzi wielding bad guy straight from a ‘Die Hard’ movie and pulling the best Metal faces you’ve ever seen, he bombarded his Flying V with intense authority. 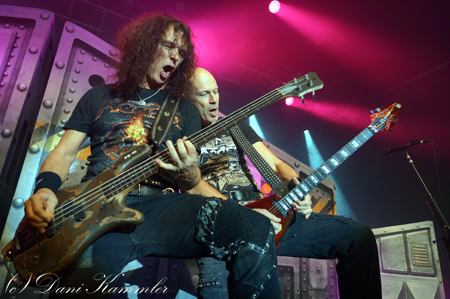 Given that this was an hour long set, you were always going to get doused with the big guns. ‘Restless And Wild’ was swiftly followed by ‘London Leatherboys’ which put the masses well on their way to Metal heaven but it was their signature anthems ‘Metal Heart’ and the monstrous ‘Balls To The Wall’ which put them right at the Pearly Gates.

This was old school Heavy Metal done at it’s very finest and having drummer Christopher Williams stuck in the corner due to Sabaton’s stage set up didn’t take away one bit from this bruising masterclass. 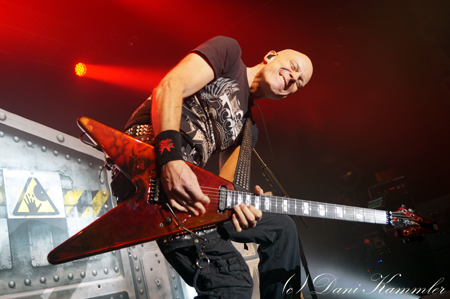 As a band who specialise in penning massive anthems about historical battles, Dublin could definitly throw up some swift inspiration for Sabaton should their creative juices temporarily bite the dust.

For this city has had it’s fair share of conflict over the years, including The Battle Of Clontarf, where just over a thousand years ago Brian Boru rode into town and knocked seven shades of shite out of the Vikings.

But there was to be no battles tonight, instead band and audience united to feast on a decadent banquet of pummeling Heavy Metal. 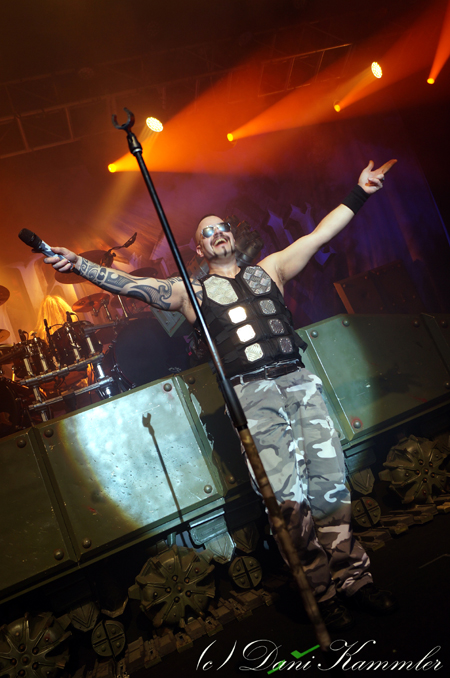 A lot of the older hardcore Accept fans in their overly snug t-shirts made their way nearer the back to avoid losing their valuable dentures in the expected mosh. As Sabaton’s military clothed roadcrew tore away the covers to reveal Hannes Van Dahl’s massive tank drum riser, a few anxious looking punters looked like they were about to be sent out on the frontline.

That’s because this is no ordinary band. This lot bring out the inner warrior in their tribal support and as soon as the Swedes rattled out ‘Ghost Division’, fists were raised aloft and a Metal thirsty Irish crowd got to forgot this was a Tuesday and a work night and went baloobas for ninety minutes.

New album, ‘The Last Stand’, got an early airing with the rousing ‘Sparta’, a track that is sure to be a live regular for years to come, then we were taken to Scotland with ‘Blood Of Bannockburn’, and although there wasn’t a kilt in sight, a few well tanked Dubs got right in the spirit and did their take of a Highland jig. 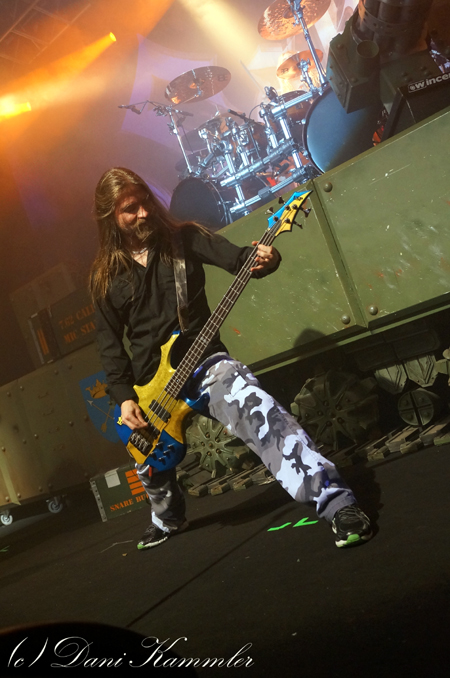 Frontman Joakim Broden may look like a guy who would rip your head off for a bet, but behind those trademark aviator shades is a man who’s hellbent on giving the fans a bloody good night. Whether that be taking the Mickey out of baby faced new guy Tommy Johansson or swiping a fans smartphone, the guy holds your attention.

‘Swedish Pagans’ and ‘Carolus Rex’ never fail to ignite an audience and they didn’t dissapoint tonight. You’d do well to find an army of fans who are as knowledgeable as Sabaton’s. New song ‘The Last Stand’ was greeted like a classic and went down as well as any other track tonight and ‘Far From The Fame’ signalled for some serious moshing to commence, and while most non participants took the odd shove in good spirits, one overzealous chap decided to give it back with his fists. However security gave him a few stern words and allowed the mosh abandon to continue. 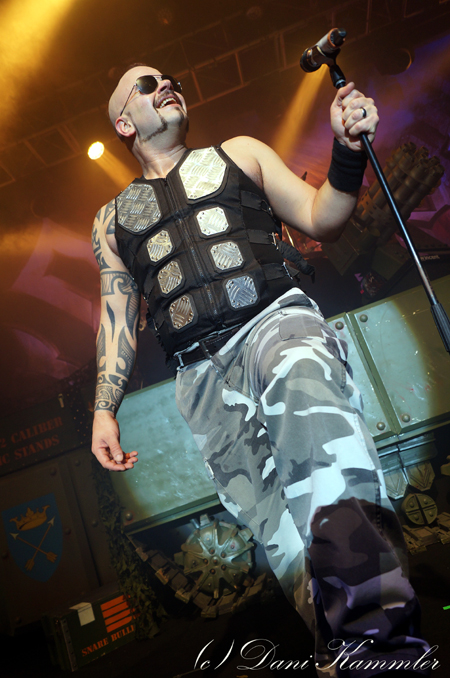 Over the years there’s been some strange items chucked up on stage at various gigs. You know the usual, pints of urine, soiled underwear and of course, Ozzy’s bat but tonight was probably a first, because I’ve never heard of a Kinder egg incident before. With the crowd chanting “eat it” and Chris Rorland breaking into Michael Jackson’s ‘Beat It’ riff, Broden duly obliged and wolfed it down.

But it was back to business from here on in and Sabaton just kept on pumping it out, ‘Shiroyama’, ‘Union (Slopes Of St Benedict)’ and ‘Primo Victoria’ were all executed brilliantly, and the hugely energetic crowd just lapped it up.

Sabaton aren’t everyone’s cup of tea, the Metal snobs label them chessey and one dimensional but judging by the reaction tonight, I doubt they and their loyal fans give a monkeys.