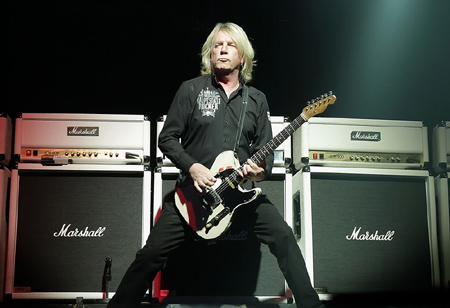 He is being treated in a hospital in Turkey and whilst his condition is serious, he has already demanded his customary cup of tea with two sugars and a sweetener.

The band had already agreed to perform at the Rock On Windermere charity show on Saturday 18th June to raise funds for the Cumbria Flood Appeal. Rick and the band did not want to cancel this important show and so it will go ahead with Freddie Edwards, the son of Quo bassist John “Rhino” Edwards, stepping in for Rick.

It is likely that Freddie will stay with the band to allow them to honour their commitments and not let down the fans up to and including the show on Sunday 3rd July at Gröna Lund Tivoli, in Stockholm, Sweden.

Simon Porter, the band’s manager said: “No further comment will be made at this stage until the completion of the next round of tests and assessments to be made over the next few days. We would ask you to respect the family’s privacy at this difficult time.”

Rick has a history of heart trouble and following a heart attack in 1997 he had a quadruple heart bypass, when he was told by doctors that he could die “at any time” unless he changed his lifestyle of smoking and drinking. He suffered another heart
attack in December 2011 and underwent surgery on the following day. On 1st August 2014, while on a European tour with Status Quo, he was hospitalised in Pula, Croatia, forcing the cancellation of six shows on the tour.

This isn’t the first time that Freddie Edwards has substituted for Parfitt having previously done so at the band’s Clumber Park show in August 2014 after Rick was hospitalised in Croatia. This was the first ever Quo show that Rick had missed since joining the band in 1967.

Freddie Edwards later appeared alongside Rick Parfitt and the rest of Quo on their ‘Aquostic’ album, the band’s first complexly acoustic album, and the subsequent tour.

Following a final high profile European tour, which will start in October and include UK dates in December 2016, Status Quo have announced an end to their electric tours. Named the “Last Night Of The Electrics Tour”, the band will plug back in and bring their thunderous electric live show back to the nation’s venues for the last time.

These final electric tour dates will truly be the end of an era as Status Quo turn their back on constantly touring their fabled electric live set. Since first charting in 1967 the band have become a truly iconic and massively influential rock act. The world of music will not be the same once the dust has settled from The Last Night Of The Electrics Tour.

Tickets for UK and Irish dates are available by clicking here.