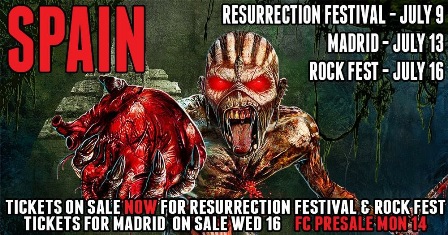 Tickets for Resurrection & Rock Fest are already on sale now via the festival websites and
Madrid go on sale Wednesday 16th Dec with the Fan Club Presale on Monday 14th Dec.

The official announcement from Resurrection Fest can be read below:

It is with great pleasure for us to announce the addition of one of the most successful and biggest bands on Earth: the legendary Iron Maiden will be the main headliner of Resurrection Fest 2016!

This concert will be the first time in more than 13 years that the Brits will play in Galicia, being part of the presentation tour of their new album “The Book Of Souls”, during which they will headline at the most important European festivals like Wacken Open Air, Download Festival or Graspop Metal Meeting.

All its members, the singer Bruce Dickinson, its bassist and founder Steve Harris, its drummer Nicko McBrain or the guitar trident formed by Dave Murray, Adrian Smith and Janick Gers, will make the eleventh edition of the festival a dream come true for thousands of fans that will travel one more time to Resurrection Fest.

Bruce comments:“It’s been some time since our last show and we cannot wait to get back out on tour. Maiden thrive on touring and playing to our fans, it’s what we enjoy the most. We look forward to returning to Galicia for Resurrection Fest 2016.

We haven’t decided on the set list as yet and won’t until we start rehearsing but we really look forward to playing a number of new songs live, especially as the recording of The Book of Souls was so much live. However, as it’s been a while since we saw you all, I am sure we will include plenty of older fan favourites too.

I think the fans will be delighted by what we have in mind. We are also in the middle of creating the new show and rest assured we are working hard to bring you all something spectacular, something with a lot of heart !!! You certainly deserve it for your patience. We very much look forward to seeing you all at Resurrection Fest next year“.

There are still more than 60 bands to be announced, but other big names are already known. Among them, from Denmark we have Volbeat, one of the strongest Metal bands nowadays thanks to their fresh and rock’n’roll sound, and from the US The Offspring, one of the biggest punk-rock bands left that had to come to Viveiro.

Moreover, tens of bands from the most Extreme Metal, hardcore and punk sounds will come to Lugo, transforming again Galicia into a destination point for thousands of people from Spain and all around Europe.

The festival organization informs that this year all the records will be broken again and it will be a unique and unrepeatable opportunity to witness Iron Maiden’s show in an idyllic environment like Viveiro.

Tickets for the event are on sale for only 85 € plus fees on the website of the festival, and the rest of the bands will be announced soon, adding up to 75 bands for an unrepeatable and unmatched price.

IRON MAIDEN will be at Resurrection Fest this year. What about you? See you in Viveiro!