OSI’s Jim Matheos doesn’t much believe in taking time out from work. Aside from being one half of OSI with Kevin Moore (Dream Theatre, Chroma Key) he’s also leader of Fates Warning. He’s involved in various side projects including Arch/Matheos and he’s currently busy promoting OSI’s recently released album ‘Fire Make Thunder’. 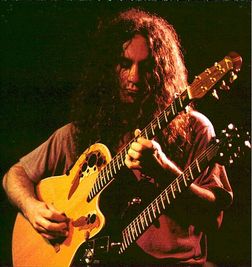 I am talking to Jim on the phone from his home in the US of A. He tells me he’s feeling pretty damn jaded after several weeks of full on promotion but he’s sat comfortably and ready and eager to chat to MetalTalk.Net!

You’ve recently released your new album ‘Fire Make Thunder’ which is doing well in various charts including the Billboard New Artist and Hard Music Albums. How are you feeling about its success to date?

“In all honesty, It’s pretty early right now, we always like to give it a while, a couple years down the line to determine if something is successful but on a personal level once the record is recorded we consider it a success at that point because once we’ve done our job and done our best and we’ve reached that point, now it’s up to the record company and the guys that promote the bands to take it to the next level.

Would you regard this as the best of the four releases to date?

“That’s always a hard question to answer and it’s so hard to look at that question objectively. I would probably say that the record I was most fond of was ‘Blood’ which was the previous one to this latest one, but it’s really close and I wouldn’t put so much effort into it if I wasn’t happy with it.”

It’s well documented that OSI is an internet assisted project with various guest musicians coming on board and recording their individual parts in separate studios around the world and then piecing it all together. Is this simply to overcome the hurdle of getting musicians together in one place or a preferred way of working?

“It’s a much preferred way, it’s done very much on a choice and a necessity. Both Kevin and I like to take our time to explore different ideas to really experiment on our own before we present ideas to each other. Doing it this way gives me time and comfort to try out different things and you know, maybe nine out of ten things either don’t work or maybe sound really stupid and I’d rather do that on my own than having people watch me do it and having the studio clock ticking all the time so it’s really done out of necessity and we both feel comfortable this way.

“I couldn’t work in a studio with the clock ticking and there being a sort of rush attitude. I just couldn’t work that way. Plus we often have roll call of guest musicians, as you rightly point out, contributing so the logistics of bringing that altogether makes this the only practical way of doing it.”

Collaborating with other musicians is easier when recording this way?

Oh sure, I mean we’ve roped in and worked alongside some incredible musicians and the logistics and expense of collating that amount of talent would go off the scale for us. We’ve worked with Mikeal Akerfeildt from Opeth and Bloodbath, Porcupine Tree drummer Gavin Harrison and Dream Theatre drummer Mike Portnoy. Gavin played drums on ‘Fire Make Water’.

What are the influences for your lyrics?

“That is Kevin Moore’s territory, he is the lyricist and I can’t really speak for that, but I know his writing process tends to be one where he will put the music on and sometimes hum along to it and mumble different words and sometimes he will pick lyrics up elsewhere that inspire him and maybe as a conscious or unconscious thing he will take things from them that makes sense to him and make something out of that later, but other than that I don’t really know.”

Office of Strategic Influence (OSI) is a bit of a mouthful for a band name, what’s the story behind the name?

“There’s not really a huge concept behind it, if I remember correctly there was a phrase that was in a spoken word sample that we were using in a song at one time which we later removed incidentally but we thought it was a cool name; a couple songs had American themes to them, not heavily but it touched on it now and again, not in a major way. We threw many ideas back and forth at one time and this phrase just stuck out as being kind of a cool name to use, nothing more in-depth than that I guess.”

OSI is not a live performance band because of the huge production challenges. Is this something that may change in the future?

“We are hoping to and we’ve said this for every record now and I think we are getting closer to it, I am looking to having a meeting with Kevin this week and as you pointed out, there are some obvious obstacles that have to be overcome like layered and multiple guitar, keyboard and drum parts, loops etc, but we are going to see what we can do and I think this is our best opportunity so I’d say it’s more likely than not that we can organise some decent shows sometime this year.”

Not much seems to be written about your beginnings, how you actually got into music?

“(laughs) That is such ancient history I have to think for a few minutes. Well, musically from the mid 80s it’s been Fates Warning and that’s been my main job for the last 26 or 27 years but how did I get into music? Oh blimey, I have an older brother that plays guitar and kind of got me into listening to some bands and took me to some gigs and I’ve constantly been around people who like music, some just wanted to listen to it and others who felt a necessity to take it to another level who wanted to create like the artists that inspired them and I guess it was into that group I found myself.”

When you’re not creating music yourself what is music to your ears, what sounds do you go for?

“I’m pretty extensive and it will be everything from Metallica to Bluegrass and some classical, it’s hard to specify, it depends where I am in my head, feeling mellow and chilled or you know, liven it up a bit, who knows, I like to keep myself open to all music.”

It must sometimes difficult to juggle between projects given the shift in music styles?

“I have to be in the right frame of mind, there is no set formula or blueprint, but there’s always a bunch of ideas or material rattling around and on my computer I have a continuous folder inside which I will add ideas or bits of ideas, take them out, play with them, put them back and you know, I take as long as I need for those ideas to develop as they usually do and then I decide which project they fit most, maybe OSI or Fates Warning.”

What else can we expect from you this year?

“Well, between doing promotion interviews like this one, I’ve been working on material for another Fates Warning release and the general plan is to do some recording this summer. But don’t ask me when it will be released as that is record company stuff, sometimes they hang onto it for a few months until they think it’s the right time for release but we’d definitely like it to be out before the end of the summer.”