Battle Beast will be on tour in September through to November on a European tour with Powerwolf.

MetalTalk’s Mark Taylor got on the phone to Helsinki to have a chat with guitarist Anton Kabanen about life in the beast that is Battle Beast.

Hi Anton, Your latest album has an eponymous title, ‘Battle Beast’. Is this the start of a new beginning?

“Yes, you could say that, because we self produced the album and the lead singer changed which has made a big impact, so yes, this is the start of something new.”

Your new singer Noora Louhimo has a great voice. How did you find her?

“I actually found her on YouTube whilst I was looking for some singers. I thought ‘Wow! She can really sing’ so why not give her a call and tell her the situation and that we were recording and that we had a tour lined up with Sonata Arctica and the rest was history.”

Had she sung in professional bands before?

“Well no actually, she had been in one band years before but not on a professional level.”

What do you feel she has brought to the band, has Noora taken you to another level?

“Her professionalism is far better and higher. Working with her in the studio was a lot easier than working with our previous singer.” 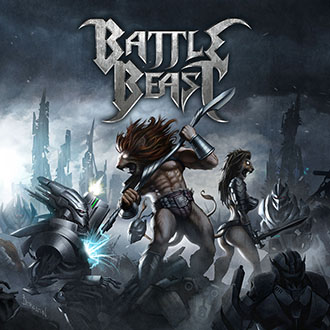 I really like the art work on the cover of the album ‘Battle Beast’. Who was the artist?

“Claudio Bergamin, he’s from Chile. He contacted me and we got talking about this concept and what we wanted it to be, and he captured that.”

On both of your albums you have a battling lion, which has sort of become the mascot for Battle Beast. Does the lion have a name?

“So far I haven’t come up with a name, it’s just a beast or a lion man or whatever you want to call it.”

Maybe, you can leave that idea up for you fans to chose in a competition or something?

I noticed that on Facebook in your biography section you have this statement – ‘100% Metal 0% Bullshit’. Tell us more about what you mean by that.

“Well, whatever we do, it’s always about the music in the first place. As a songwriter for this band, especially for me, that I stand behind all the songs that I write and I’m a huge fan of traditional Heavy Metal bands like Judas Priest and Manowar and all that. It’s actually a statement that our bass player Eero came up with.” 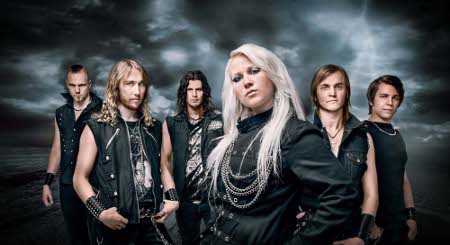 I must admit, I’m a big lover of traditional bands like Priest, Maiden and real Heavy Metal. Do you think there aren’t enough bands playing real traditional Metal around today?

“Well yes, I think that nowadays there are more and more sub genre bands. There are less good real Metal bands. There are too many doing it in a retro way which I think is cheap and an insult. I believe there should be more bands that should play traditional Metal with their heart and soul.”

In 2010 you won Metal Battle competition at the Wacken Festival. Tell us more about that.

“It was such a surprise for us winning the competition. We were already back in Finland when we heard the news by email a couple of weeks later. It was a big thing for the band as we were a demo band, we had no record deal at the time and is one of the greatest things to have happened to the band.”

You recently played at a festival in Finland, the Tuska Festival. How was that for you?

“The gig was totally great. We got a call two days before the gig asking us if we could play. We didn’t have much time to prepare. As musicians we hadn’t played for a couple of weeks. Asking Alexandria had to pull out and we took their place and Nightwish went on after us. It was really fun and a great show. Once in a lifetime.”

You’re from Helsinki and there is a music venue there called the Tavastia Club. Can you tell our readers from abroad what the Tavistia Club is like?

“It is the most legendary club here in Finland. If you have a band and have a gig there and pack it out then you know have made it.” 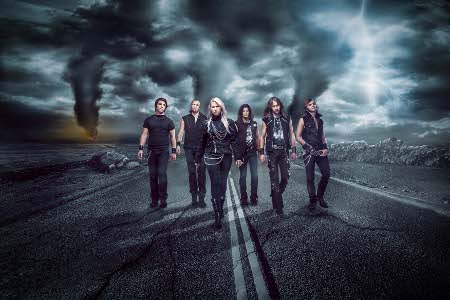 You have a European tour lined up later this year. Are you looking forward to it?

“Yes it’s a big tour. There’s four bands per night including Powerwolf. I think it’s about 20 dates in total. It will be the first time we get to play in England. We are really thrilled about that. We love to tour and be on the road. We love it.”

What’s your favourite country you’ve played in so far?

“I can’t really pick one. A show is a show, a Metal fan is a Metal fan no matter where we go…”

What was the first record you ever bought?

“The first record I owned was a Judas Priest one, but first I bought with my own money was Deep Purple ‘Slaves And Masters’.”

What ambitions do you have for Battle Beast in the future?

“I hope we do this until the day we die. Like a family, I hope we will get bigger and bigger.”

Anton, it’s been great talking to you and I look forward to your show with Powerwolf, Majesty, Ashes Of Ares and Wisdom at the Camden Underworld on September 27th. Thank you. 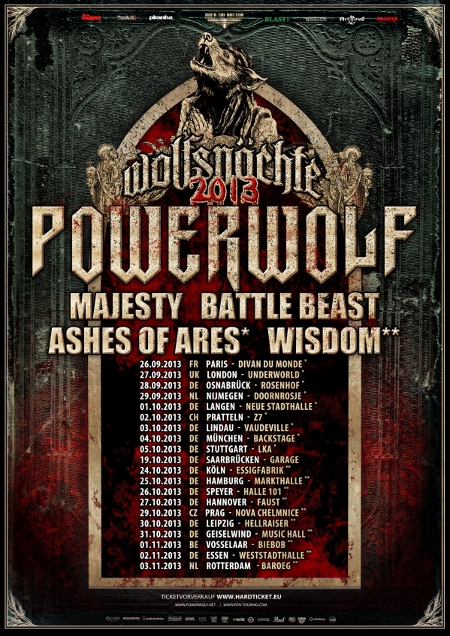 The album ‘Battle Beast’ is out now on Nuclear Blast and you can catch the band live throughout Europe during September through to November. Beware the Beast!

Machinage: 'It Make Us Hate'