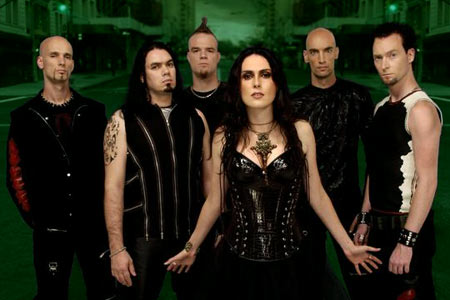 The band have made the following comments;

“We are sorry to announce that Stephen and Within Temptation will go their separate ways after the upcoming theatre tour. It isn’t easy to say goodbye after all we’ve been through together. In this period of time many dreams have become reality for all of us and exceeded our highest expectations. Through the good and bad it has created a bond; we’ve had a wedding, a funeral and have seen each others kids being born and growing-up. Everything passed in a flash and we are looking back on it with a smile.”

“We would like to thank him and Veroniek for all the great moments, passion and devotion. We wish you the best for the future! You can still see Stephen on stage with the upcoming theatre tour and in the future with his band ‘My Favorite Scar’. If you are curious check their site www.myfavoritescar.com or their Myspace site. Stephen has written a personal message for you which you can find beneath this one.”

“This may come as a surprise, but after ten great years the time has come for me and Within Temptation to go our separate ways. WT was an unstoppable train. I remember well the time that I got involved with WT as a Studio Technician. Mother Earth marked the beginning of a successful era. I couldn’t have imagined that I would be their drummer in two years time. WT developed from an underground band to Holland’s best selling musical export product. A childhood dream came true: I toured over 40 countries, shared the same stage with heroes like Iron Maiden, Metallica and Rammstein and performed in a sold out Ahoy with the Metropole Orchestra. In short, it’s been an incredible time. The things we experienced will stay with me forever.”

“But on April 29 in Antwerp, Belgium, I’ll be on stage with WT for the last time.”

“From the start of our sabbatical year (end of 2008) I started producing, recording and mixing other bands again. I found a great working spot at the Swamp Studio in Raamsdonk (NL). Very close to where I live, so I can spend more time with my family. As a musician, you have not seen the last of me though! On the contrary. As some of you may have read in our fan magazine a while ago, I have been involved with another project for quite a while now, ‘My Favorite Scar’. In this band I feel right at home, musically as well as personally. I believe this band is at the beginning of a bright future, yet all depends on the support of the fans, as always.”

“Hopefully you’ll love and support My Favorite Scar as much as you do Within Temptation! In July 2010 My Favorite Scar will release its debut album. In March 2010 we will release our first single ‘Waste’, as a free download and we’ll be starting a Dutch tour in March too. We will be playing as many Dutch and foreign shows as we possibly can. Hopefully I’ll see you guys again somewhere at a festival or a clubshow!”

“I’ve always found it hard to say goodbye and this time it’s no different. I’ve enjoyed a great time with our crew and the band. So thanks to Debbie, Pim, Guus, Bennie, Arwin, Marco, Rob, Guido, Rene, Paul and all other crew members who worked with us in the past, Raymond, Martijn, Iris and everyone at AT, Sharon, Robert, Jeroen, Ruud and my roommate Martijn and last but not least, the fans all over the world. Thank you all for an unforgettable time. Hopefully our paths will cross again soon.”

'SEX TIPS FROM ROCK STARS' BOOK TO BE RELEASED