It’s Saturday night and the Priest is back! The Epitaph stage curtain is glowing red. The house lights are down. The crowd’s chanting “Priest, Priest, Priest” and I feel out of place because I’m not standing in my usual spot! 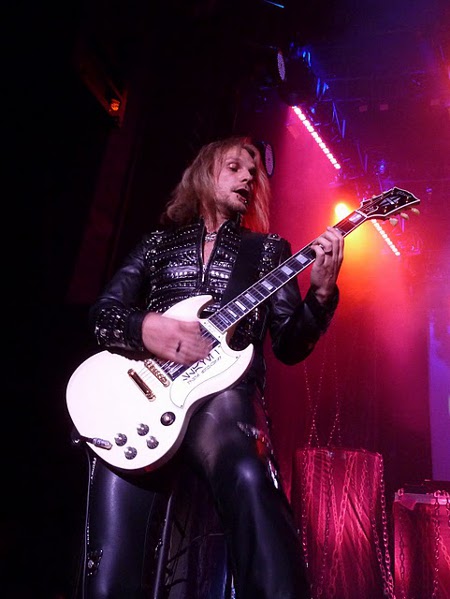 Tonight is a special night for various reasons. KK Downing is no longer with the band and we’re all keen to see just how smoking-hot his replacement, Richie Faulkner, is. It’s also Priest’s final world tour, after almost 40 years traversing the globe, so there’s poignancy about tonight as it may be the last time Manchester plays host to the Metal Gods.

I’ve also had the incredible opportunity to interview Ian Hill for MetalTalk.net, so I’m late to the party, having missed Rival Sons and most of Queensryche.

As the curtain drops and the band appear, I’m inside the crowd barrier, glued to the front of the stage – on photography duty for MetalTalk.net!

When Scott kicks off the opening drums for ‘Rapid Fire’ and Ian, Glenn and Richie fire up the amps it’s like standing in the slipstream of a 747 jet! I’m up close and personal with Richie’s guitar and I can literally feel the riffs flying past my head. 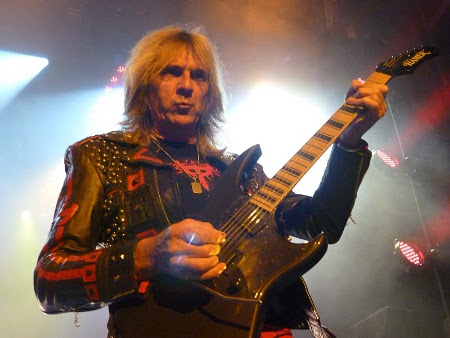 Scott’s drumming is pulverising my kidneys and shaking the room and I can barely hear Rob’s vocals, as I’m basically too close. It’s a jaw-dropping experience!

Despite some tech problems, which affected Richie’s guitar for the first few songs, the band hit the ground running with a world-class opening trio of ‘Rapid Fire’, ‘Metal Gods’ and ‘Heading Out To The Highway’. It immediately showcases just why Judas Priest have been able to tour the world picking up new fans for 40 years. 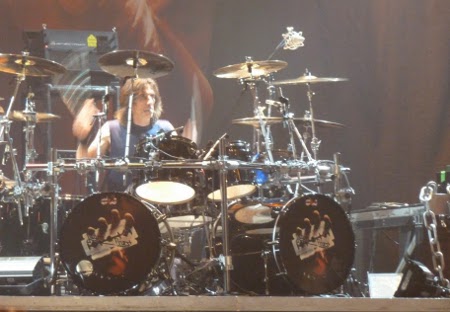 The depth and variety of their song writing – the “light and shade” as Rob Halford calls it – sets them apart from thrashers like Metallica and Slayer, while the sheer intensity of the double-kick drum attack from Scott Travis lifts them into a heavier, faster stratosphere than Iron Maiden or Black Sabbath.

And then there’s the voice. Halford’s voice has been criticised by cynics for years but tonight his vocals are spot-on and he owns the stage. Prowling like an ageing panther and screaming his mic into distortion, he’s a one-man powerhouse that will never be matched. 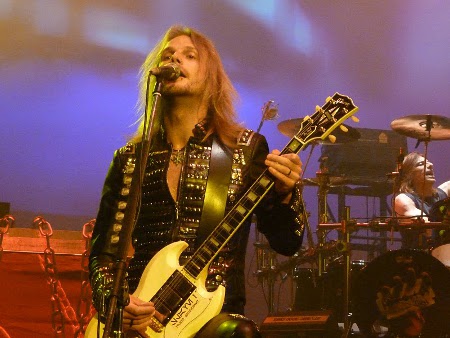 The set dips a little while Richie’s technical problems are sorted and it allows Halford time to point out to the impatient crowd that the Priest are a truly live band – it’s all 100% real. And after a strange few minutes of nothing, which gives me time to get back to my usual spot near what used to be KK’s side of the stage, the set kicks into gear with ‘Judas Rising’, ‘Starbreaker’ and a truly epic ‘Victim Of Changes’.

Any doubts about KK’s retirement are eased as Richie plays a blinder. Seemingly squeezed into one of KK’s cast-off pairs of leather trousers, he’s perfect in this role. He plays wild, works the crowd and delivers the goods way better than you’d believe. Nobody would want KK to miss this tour but if he’s determined to stay away then Priest have struck gold with Richie Faulkner. 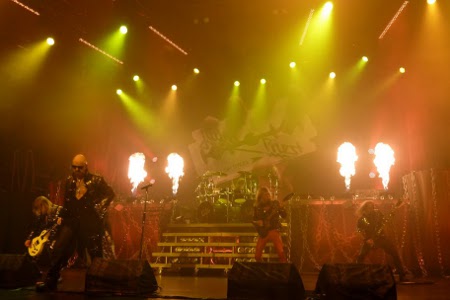 Glenn’s on top form too, with Ian Hill, static as always, looking like he’s loving every second of the show – they’re like the elder statesmen allowing Richie and Scott to run wild.

Major highlights tonight include ‘The Sentinel’ and theatrical power-Metal classic, ‘Nightcrawler’. Plus a crazy ‘Diamonds And Rust’, the epic ‘Turbo Lover’, and a powerful, emotional ‘Beyond The Realms Of Death’. But for me one track rules the night – the classic from the ‘Ram It Down’ album and my personal highlight: ‘Blood Red Skies’. 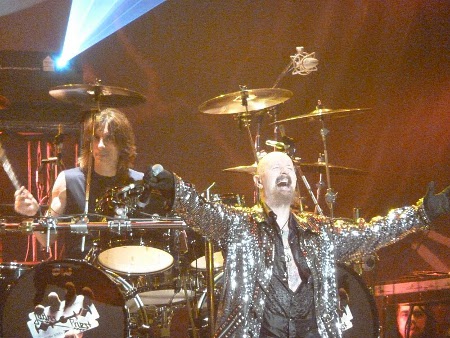 And to all you doubters – yes – Halford genuinely sings the high-pitched intro bang on the money and then belts out this awesome sci-fi themed track like there’s no tomorrow. It’s truly epic. It also makes up for his extraordinarily odd appearance dressed as a foil-wrapped Gandalf for ‘Prophecy’.

After a crowd-pleasing ‘Breaking The Law’ and ‘The Green Manalishi’, Scott’s moment arrives for the ‘Painkiller’. Preparing us for the onslaught with a powerhouse drum solo, this human drum machine is mesmerising. It’s just raw power, totally dominating the song. ‘Painkiller’ is unbelievable. 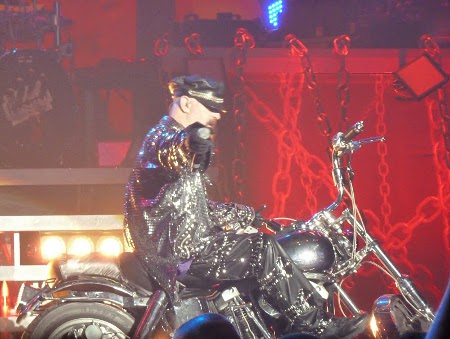 Halford disappears into a crouch and you don’t really hear the vocals – you just get swept away by the force of this song. It is the definitive Metal moment – a drum driven devastation. It’s a hostile/brutal/terrifying wall of sound that takes your breath away. Fantastic!

The encore’s exactly what we’ve come to expect. ‘Electric Eye’, ‘Hell Bent For Leather’ on the Harley and the epic ‘You’ve Got Another Thing Coming’. Fresh from its exposure on American Idol, the band stretch it into a lengthy love-in, complete with Halford sing-along and Richie being given free reign to solo for a couple of minutes mid-way through. 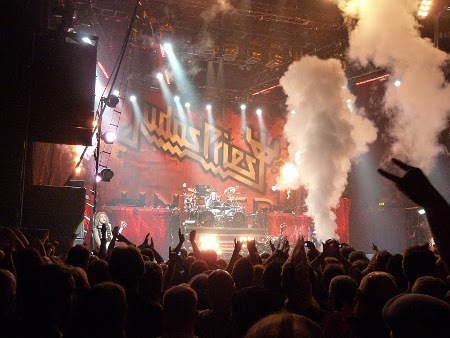 Freestyling, wrenching and ripping his guitar strings, accompanied only by Scott and Ian, he certainly captures the essence of departed KK Downing. Halford re-emerges to simply state: “Richie Faulkner”.

And then it’s over. Except it might not be because with a new album in the works and an exciting new guitarist breathing life into the stage performance, I reckon we’ll see the Priest again. They might be the elder statesmen of Metal but when they hit their stride with ‘Nightcrawler’ or ‘Painkiller’ there’s nobody to match them. Metal Gods indeed.