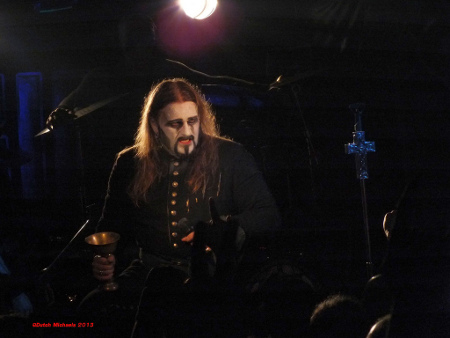 It’s game on! Four amazing Metal bands in one evening!

Majesty, old comrades from hundreds of years ago, Ashes Of Ares, Matt Barlow’s brilliant post-Iced Earth project, both playing their first ever gig in London, Battle Beast, who are sounding seriously fearsome with their new singer Noora and theatrical horror-heads Powerwolf.

How often do you get four amazing, brilliant bands all playing on one bill in your home town? It happened on Friday 27th Septemmer 2013 and it didn’t disappoint. 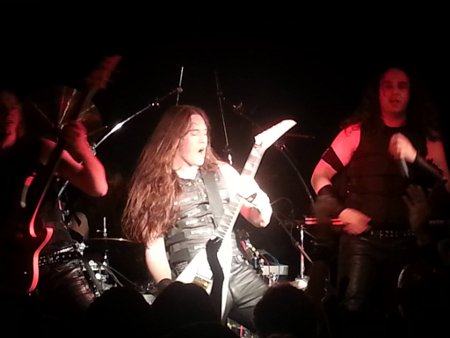 Majesty are playing their first UK gig ever. I go back a long way with this band and it’s a privilege to see them again but it would have been so easy to have missed them, like so many others actually did. The publicity said they were on at 6.30pm but the venue advertising said 6.00pm and it’s a good job someone told me they had actually started at 5.30pm…

Half past five in the afternoon is a stupidly early time to put the first band on but Majesty actually played to a more than respectable crowd who joined in the big choruses without prompting and created a great atmosphere.

Frontman and band founder Tarek Maghary did not have to try too hard to win over the London Metal faithful who revelled in his every “Hail” and joined in with every song. When they heard the Metal Law, they certainly did Make Some Noise and the band never let up once.

‘Heavy Metal Battlecry’ was possibly the highlight of the performance but really, every song was a winner and an anthem in it’s own right.

The band pulled off a stunning performance whilst leaving out classics such as ‘Son Of Metal’, Starke Vie Stahl’ and ‘Hail To Majesty’. Those three tracks are all from debut album ‘Keep It True’, one of seven studio albums that should all be checked out.

The new Majesty album will be released on December 20th 2013. Let’s hope they follow it with another date in London. 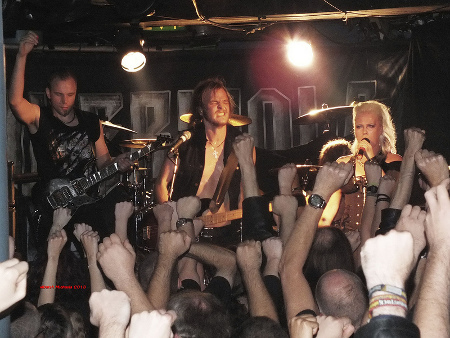 Battle Beast have come a long way since Noora Louhimo took over as front lady and it just has to be said – they were absolutely superb tonight.

The uninitiated got an introduction to a band that could become absolutely massive as they have every ingredient that it takes. They’re powerful with strong songs, a great line-up of talent in their ranks and a front lady who just totally gives it to you straight between the eyes.

She’s a bit scary actually is Noora in a “don’t fuck with me” kind of way. She means what she sings and she sings it so you make sure she means it. Battle Beast are not messing about here and for sheer brutal melody delivered with an almighty kick in the balls, look no further than this Finnish power house.

Guitarist Anton Kabanen is Battle Beast’s good cop to Noora’s ‘beat the shit out of you’ cop. I don’t think I’ve ever seen a Metal guitarist genuinely smile so much and it was a pleasure to see a man so happy with what he was doing. The crowd were happy too as Battle Beast quickly showed them who was going all the way to the top.

Battle Beast Setlist:
Let It Roar
Cyberspace
Out On The Streets
Neuromancer
Kingdom
Black Ninja
Enter The Metal World
Out Of Control 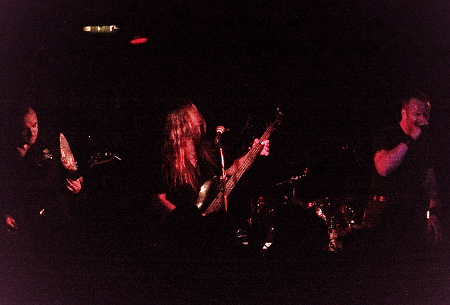 As the former Iced Earth frontman who left the band shortly after 9/11 to become a police officer, Matt Barlow needs no introduction.

Matt’s is one of the most recognisable voices in Metal and after he left Iced Earth again in 2011, due to his commitments stopping the band touring as often as they wanted to, he formed Ashes Of Ares, along with former Iced Earth bass player Freddy Vidales.

And tonight is their debut UK performance and the interest is such that it is difficult to get much further forward than halfway to the stage.

With Matt and Freddy in the band, it was always going to contain Iced Earth influences but the band’s material also stands up on it’s own and in it’s own right.

Atmosphere wise, it cannot be faulted. It’s got quality stamped all over it and I imagine Ashes Of Ares will prove to be a big drawer at the summer festivals.

They’re almost certainly got a classic album in them as well, maybe two or three down the line and it’s great to see Matt playing again as he would be a big loss to the Metal world.

Ashes Of Ares are a solid band with some great songs and they have a big place in the Metal world if they want to take it up.

Ashes Of Ares Setlist:
The Messenger
Move the Chains
Dead Man’s Plight
This Is My Hell
Chalice Of Man
The One-Eyed King
Punishment
What I Am 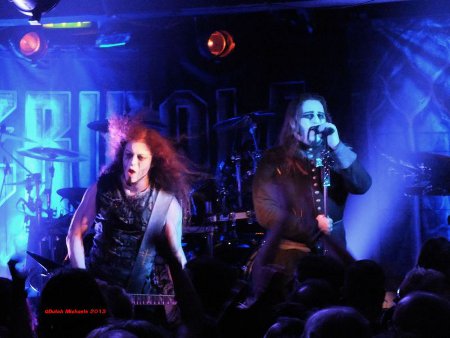 When the time came for Powerwolf to hit the stage, the Underworld was full to capacity and it was impossible to get close to them throughout the entire set as they held their audience captive with a staggering performance.

This band are very unique in terms of image and style and musically, they are like nobody else out there. The songs just grab you and carry you away to a Gothic tinged, crazy, twilight wonder world. They’ll spirit you away and have you chanting their power-choruses all the way to their demonic fantasy land and when you get there, you’ll think you can fight God.

Vocalist Attila Dorn is a mighty, commanding presence on stage and the Greywolf brothers pull no punches with furious riffage and epic hooks shooting out all over the place.

Dorn banters with the crowd between numbers but the pace never lets up once and Powerwolf win the day by a country mile, leaving a jam-packed Underworld totally exhausted and safe in the knowledge that it will take more than a silver bullet to see off Romanian Werewolf Metal.

More power to Powerwolf who really were alive in the night in London.

Encore:
Raise Your Fist, Evangelist
In The Name Of God
Wolves Against The World